The Parish of Meltham – Christ the King

Sharing the love of Jesus in our community

Please join us for worship in Meltham Parish.  We have a variety of services for all tastes each week as follows:

Watch all our services from St Bartholomew’s either live each Sunday morning or retrospectively on our Parish YouTube channel:
Link to YouTube Channel 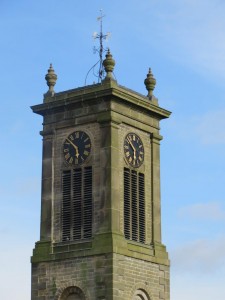 The first chapel on this site (thought to be by Joseph Jagger) was built with the help of William Woodhead and was consecrated in 1651. Prior to this the nearest chapel was at Honley. It had a single bell which was replaced by a larger one cast by Edward Seller Junior in York in 1736.This was of course in Cromwell’s time.

The current church was rebuilt in 1782.  The tower was added in 1835 with six bells cast by Taylor’s Bellfoundry, who were then based in Oxford.
The treble weighs 5 cwt. 3 qr. and 18 pounds is in the note of D and bears the inscription “Taylor Fecit Oxford. Mortals with us your voices raise and sound abroad
Jehovah’s praise. The gift of Edmund Shaw, gentleman. Lingards 1835”

The second weighs 5 cwt. 2 qr. and 21 pounds, is in the note of C with the inscription “A voice from the Temple a voice from the Lord. Revd. L Jones. Minister 1835.

These are the only bells in the Diocese which were cast while Taylor’s were still at Oxford. They were hung in a wooden frame and were rung regularly every Sunday
until 1879 when it was discovered that the frame needed extensive repairs, so they remained silent until 1886 during which time the chiming mechanism continued to
play tunes.

In 1886 they were re-hung in a metal frame, the cost of which was met by public subscription and the first peal was rung on February 20th.

A clock movement, made by Titus Bancroft of Sowerby Bridge, was installed in 1837 Gillett, Bland & Co. of Croydon cast four extra bells and installed them with a  chiming machine during 1878/9. These bells all bear the inscription “Cast 1879, Recast 1936.” the lightest of these also bears the inscription “ H.T.F. Barter, Vicar and Rural Dean. R. I. Atha, J. E. Preston. Wardens”

This chiming machine had three tune barrels, each of which could play seven tunes, one for each day of the week, on the hour. There are differing reports detailing the  content and composition of the barrels but here is a list of all tunes mentioned:-

The third barrel had a series of campanology methods on ten bells.  There is also confusion on the periodicity and repetition of the tunes, one report claiming “a fresh tune every day for a fortnight, each to be played three times over every three hours day and night at six, nine, three and twelve, the change of tune being at midnight”!

On January 14th. 1930 the heavy stone clock face on the western side of the tower fell out and crashed to the ground. Luckily no one was injured and a replacement face
made of metal was installed along with new hands and final drive mechanism.

The chiming machine started to suffer from mechanical problems and ceased working in the 1940’s and was electrified in 1963. It continued to have problems and was
taken out of use. It has remained unused and is now in a derelict state. The complicated operating rods and hammers cause periodic problems by interfering with  the movement of the six change ringing bells and various temporary repairs have had to be carried out by the ringers in order for ringing to continue.

5 of the original bells were recast and re tuned by Taylor’s and rehung in a new cast iron H pattern frame in 1936 to commemorate the coronation of King George VI and
Queen Elizabeth. At the same time, Taylors recast the four chiming bells. The Tenor bell remains a “maiden” casting. There has been no further work carried out on the
bells since then! (77 years).

The clock was replaced and electrified in 1958.  Since that time, the clock has suffered various failures due to weather damage and temporary repairs were carried out. It finally ceased working altogether in 2011 and it was discovered that one of the faces was jamming, preventing any movement. It was impossible to gain access to the rear of three of the faces to discover where the problem lay due to the dereliction caused by the weather to the wooden structures within the tower so the only accessible face was isolated and allowed to show the correct time.

A public appeal was launched in 2012 and a massive response was seen from the community. With the help of English Heritage and Meltham Town Council, £127,000 was raised and restoration work commenced. The work was completed in August 2013.

In order to allow access to the interior of the tower, the chiming mechanism had to be removed but has to be replaced to its original condition. Work on this is currently under way and is expected to be complete before the 365th. anniversary of the first chapel on St. Bartholomew’s Day, August 24th. 2016.

Bible verse of the day

Peacemakers who sow in peace reap a harvest of righteousness.
James 3:18

Copyright © 2022 Parish of Christ the King, Meltham. All rights reserved.